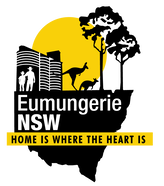 Many cemeteries have been lost because of time, weather, land erosion, woods and relocation. Many of the vital records for these cemeteries have also been misplaced or lost leaving many questions  about our ancestors unanswered.

Eumungerie General Cemetery is one of the lost and forgotten. Hidden for many years by a forest which completely reclaimed its own. In the 1970's, a double grave, surrounded by an iron palisade, was all that remained to show the role of this once hallowed ground. The forest today is almost impenetrable.

Here we tell the stories of those that lived and died during the boom days of Eumungerie. News articles and obituaries have been collected through archive newspapers and categorised by surname. Not all residents were buried in this cemetery but their lives were integral to the daily life of this village.
One of the first trustees of the Eumungerie Cemetery was Mr W Pettersson, he made the coffins and read the burial services over most of the people buried there. The car used as the hearse was a T-Model Ford owned by Mr W Dewhurst, it was the first car in the Eumungerie village. The Eumungerie General Cemetery was dedicated on 2nd August 1905. This was revoked on 15th September 1967, with a portion being reserved for a rubbish depot and the remainder of the cemetery gazetted as a Reserve for the preservation of graves.
The known loved ones buried within are:
1915    Mary B M Alderton, age 7, daughter of Herbert J & Mary A (nee Hewett),
1918    Mary Sharp, infant of Henry Edward & Mildred Mary Corrie (nee Bowen)
1918    James Knight, age 21, son of John & Maggie
1919    Veronica Sharp,infant of Henry Edward & Mildred Mary Corrie (nee Bowen)
1920    Wilfred Dickerson, child, son of Herbert H & Ethol M (nee Priest)
?         Unknown male, suicide by hanging himself from the railway bridge
?         Nagle, female child, daughter of either:-
1. Ernest & Aubrey Nagle, nee Patman, or his parents
​           2. David & Sarah Nagle, nee Wilson
If you are able to add to this list or would like to contribute to this website please contact us.

The Eumungerie Cemetery was reclaimed by volunteers during 2014/15. Part of the Presbyterian/Methodist section was cleared of scrub and fenced off. The area once again returned to hallowed ground with the addition of a white palisade around the last visible grave.  Unveiling of the restored cemetery can be read on this link.

​Rural Fire Service (RFS) – Australian Fire Service Medal
JOHN CHARLES MACKENZIE Secretary/Treasurer – Eumungerie Brigade, Orana Team, Region West
Mr Mackenzie has served the Eumungerie community and the wider Dubbo area with over 57 years of devoted service to the RFS. He is known to young and old alike as a ‘no fuss’ person who gets the job done. Mr Mackenzie joined the brigade as a volunteer in 1954 and was elected secretary in 1974 before taking on the role of treasurer in 2006. He has been involved in a number of campaign fires in the Goonoo and Beni Forests. He has shown commitment and dedication to the community in which he lives as well as to the RFS, which he is extremely passionate.
​Source - www.rfs.nsw.gov.au/__data/assets/pdf_file/0016/5614/Queens-Birthday-Honours-List.pdf