"I remember the first train that went through Eumungerie. I couldn’t have been very old at that stage but I remember coming in with my father in the dray to pick up some groceries dad had sent out on the train. Previously, we had to go to Dubbo to collect our groceries; flour, sugar, potatoes, onions. Dad used to buy everything in bulk but this time he had it sent out on the train, and I came in with dad on the dray and we stood on the platform, he and I, and as the train drivers went passed, we waved to them. They acknowledged our wave. We collected our potatoes and pumpkin and all that we had; put them up in the dray and away we started for home. Home was Mountain View, and then the time came to unload. Mother had a big box; a great big box in the pantry that she used to put the flour in and sugar; to keep it mouse proof, to keep all that away from the mice. Well we unloaded when we bought it home and put it in this great big box". - Margaret Lesslie nee Salter

Eumungerie Railway originally opened as the name Coalbaggie Creek on the 18th February 1903. Three months later in May 1903 the station was designated as Eumungerie, although it was also described clearly on a 1905 parish map as Eumungerie Siding.  Later versions of the Parish Maps published in 1913 describe the station by its final and current name, simply Eumungerie.
Explaining Eumungerie, Eumungerie Rail
Mr Patman the Butcher

I remember going with my grandmother in the horse and sulky, where Mr Patman did the killing of a beast and Nana  would carry home the fresh meat. She used to boil the offal up for the dogs.  I think he could have had a small dwelling opposite the pub, where he sold meat. - Aileen Lingard nee Lesslie

I spent a lot of time with Nan when I was a child, my parents both worked so I lived with Nana and Pa. I recall a time when Pa was on his mail run and it was raining and cold. Nana and I were shut in at the old house. We could go no further than the house yard because a ferocious bull called Ferdinand was on the loose and it was wandering around making a terrible noise and frightening everybody. It was a very scary time for us, especially when Nan went out to feed up and I was left in the house alone...”  - Aileen Lingard nee Lesslie 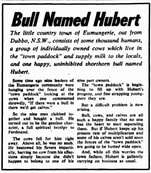 The Town Bull
Bull Named Hubert - The little country town of Eumungerie, out from Dubbo, N.S.W., consists of some thousand humans, a group of individually owned cows which live in the "town paddock" and supply milk to the locals, and one happy, uninhibited shorthorn bull named Hubert. Some time ago nine leaders of the Eumungerie community were hanging over the fence of the "town paddock" looking at the cows when one commented shrewdly, "If there were a bull in there we'd get calves." So the nine men clubbed together and bought a bull. He turned out to be the gentlest character, a full spiritual brother to Ferdinand. The cows fell for him right away. Above all, he was no snob. He bestowed his favors impartially, barring no cow from his affections simply because she didn't happen to belong to one of his nine part owners. The "town paddock" is beginning to fill up with Hubert's progeny, and fine strapping youngsters they are. But a difficult problem is now arising. Bull, cows, and calves are all such a happy family that no one has the heart to start separating them, But if Hubert keeps up his present rate of multiplication and some of his calves aren't sold soon the fences of the "town paddock" are going to be busted wide open. And, while all this worries the town fathers, Hubert is gallantly carrying on business as usual.
Smith's Weekly 2 April 1949 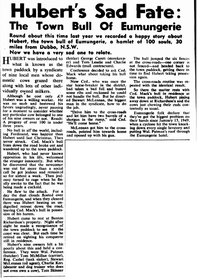 Ferdinand the Bull
Hubert's Sad Fate: The Town Bull Of Eumungerie - Round about this time last year we recorded a happy story about Hubert, the town bull of Eumungerie, a hamlet of 100 souls, 30 miles from Dubbo, N.S.W. Now we have a very sad one to relate. HUBERT was introduced to what is known as the town paddock by a syndicate of nine local men whose domestic cows grazed there along with lots of other individually owned milkers.

Although he cost only £9 Hubert was a willing worker. He was no snob and bestowed his favors ungrudingly, never pausing for a moment to consider whether any particular cow belonged to one of his nine owners or not. Result: A progeny of over 100 in under three years. No bull in all the world, including Ferdinand, was happier than Hubert until last Christmas. Then terror struck. Ced. Mack's bull from down the road broke out and wandered up to the town paddock.

Hubert came to rest at Benton Richardson's property. Night after night he made a recognisance of the town paddock to see if the coast was clear. But each time he retired on sighting his conqueror still in residence, Hubert's nine owners felt a bit poorly about this and held a conference. They were Wal. Patman (butcher) Tom McMillan (carrier), Reg. Cashel (tank sinker), Stewart McLennan (oil agent), Charlie Ken (shearer and dog trainer who does not even own a cow), Tom Skinner (fettler) George Carett (storekeeper) and Tom Lesslie and Charlie Edwards (mail contractors). Conference decided to ask Ced. Mack what about taking his bull home.

Now Ced., who was once the star horse-breaker in the district, had taken a bad fall and busted some ribs and reckoned he could not handle the bull. But he directed Stewart McLennan, the biggest man in the syndicate, how to do the job. "Drive him to the cross-roads and let him have two barrels of a shotgun in the rump," said Ced. "He'll come home." McLennan got him to the crossroads, pointed him towards home and opened up with his gun. The bull jumped the six fences at the cross-roads — one corner is not fenced — and headed back to the town paddock, getting there in time to find Hubert taking possession again. The cross-roads routine was repeated with the identical result. So there the matter rests with Ced. Mack's bull in residence at the town paddock, Hubert pining away down at Richardson's and the cows just chewing their cuds contentedly as usual.

Eumungerie folk declare that they've got the biggest problem on their hands since January 15, 1949, when a cyclone hit the town knocking down every single lavatory and putting Wal. Patman's roof through the Eumungerie hotel.
Smith's Weekly 25 March 1950
Haunted Camps
There is one particular part of this plain between Nevertire and Warren which has an evil reputation amongst teamsters, and in the early day was always given a wide berth by drovers. Many of the stories of how cattle halted there at nightfall, stampeded during the night and, impelled by terror, scattered in all direction over the adjoining country. Of later years teamsters avoid the place, warned by the experience of old hands that somewhere about the witching hour horses go mad with fright. Some years ago I knew one camp in particular, between the Coalbaggie Creek and Gilgandra, that has an uncanny reputation in the days when the teamsters pioneered the way for the coming of the iron horse. It was a well known fact that the untethered horses would not stop in camp, while those tied to the waggon poles would break their ropes or halters. It was a theory for a long while held by the teamsters on this road that untethered animals wandered from camp — not on account of any visible or supernatural agency, but because the grass in the locality was extremely sour and unpalatable. This particular camp is in the vicinity of an ancient cattle enclosure, known as Johnson's Stockyard — and may be remembered by many of the old teamsters who are still 'on deck' — on the Dubbo to Coonamble road.  The nocturnal breaking of .ropes and halters, by the tethered team horse, however, caused the owners to come to the conclusion that there was more than sour grass behind the furious objection of the animals to remain in the locality. The only explanation or suggestion offered by those who believe in the ghost theory is contained in the fact that the camp was the scene of a great battle— which even eventuated years before the coming or the white man— between certain tribes of the Castlereagh and Macquarie River aborigines. Before the spreading of the population demanded the falling of the timber, there were over a hundred aboriginal monument — standing as a silent testimony of the great tribal slaughter in the space of five or ten acres— in the shape of carved trees, which indicated the graves The camping ground of the old teamsters was nothing more than an aboriginal cemetery.
Dubbo Dispatch and Wellington Independent 15 August 1919