Margaret Salter 1890-1987 recollects living at Brocklehurst before moving to Eumungerie.

...As time went on we were old enough to go to school, so then dad went into Brocklehurst and he bought some land in there and built a home of four rooms and a kitchen out the back. We moved from Caledonia into Brocklehurst when I was seven.

I remember the day we moved and we were unpacking our things on the veranda when the school came out. There were some school children walking home past our place, they lived up what is now known as Mogriguy Creek. There were four homes up there; people by the name of Ison, Stevenson and... Hitchcock*, I think was the name, I'm not too sure about that.

Well they were walking home from school and there were three big girls and they were a little bit curious and of course they came into our place and wanted to know what our names were and one thing and another. I had a beautiful big doll. Oh I remember my doll to this day! And I was nursing my doll and they said can I have a nurse. And I said, oh yes you can have a nurse. So they all had a nurse of my beautiful big doll and away they went. Well when we settled in, of course, then we had to go to school. Not the school that’s at Brocklehurst today but a school down on... very close to the lagoon. And that lagoon, in our day, was always full of water.

When we got settled in at Brocklehurst, dad went to put down a well. He got down about, oh, so many feet and of course then he was halted by big boulders. Anyway he blasted these boulders to try and get through but he couldn’t do any good so he filled the well in and he never tried again. We kiddies we used to carry water from the lagoon in a tub and two buckets and enough water for mother to last three or four days, then of course, we’d do another carry; carry up some more water, but everybody at Brocklehurst was doing the same.

BREAD
Bread in those days was baked in the big square bread tin, you had a lovely big square loaf of bread but Mrs Stevenson, she used to make her own bread, she had a terrific big family and they couldn’t afford to buy bread so she used to make their bread. She was a wonderful cook, her bread was something beautiful and she’d always had a loaf out of the oven on the table cooling off for the school children when they came home from school, and of course all the Salter clan, they would all bung in to, and they used to get their slice of bread and dripping, pepper and salt, just the same as her own family which we thought was something wonderful, to have a big slice of bread and dripping and pepper and salt on it, it was really beautiful.

Well then the lagoon... Saturday, if we weren’t carting water, we’d be chasing the black swans, not only the Salter’s; the Arrows and the Farley’s. Not the Burgesses, because they weren’t allowed. The Stevenson’s and the Salter’s, they used to chase these swan. We used to take off our shoes and stockings and roll up our dresses,

FASHION
In those times girls were wearing drawers not panties like they are today. They were ribbed quill, our mother used to buy the ribbed quill and make our drawers for us to wear and they also made a bodice with buttons on, and then, when they made the drawers they would make six button holes in the drawers, because the drawers had a tail board and when you wanted to go out you had to undo your tail board to go to the toilet, which was not very convenient for a small child. Anyhow, we got through and then a little bit later on bloomers came in, bloomers with elastic around the leg and elastic around the waist. Well now I will try and fill in with a few bits and pieces, when we were young women we always wore long dresses, they were always sweeping the floor, or sweeping the streets if you went to Dubbo. You always had to wear starched petticoats under them, the more starched petticoats you wore the more fashionable you were, you were more popular with all the rattling the skirts and things made. In those days everything was starched, no matter what it was, all you’re little kiddies clothes and collars and the fronts of the boys shirts, and all that. In those days the collars weren’t attached to the shirts, they were loose, and they had to be buttoned on at the back and the front, and of course they all had to be starched. All we had in those days was the big, old, heavy irons and you used to put a piece of tin across your fire on two iron rods, and stand your iron on them. You used to wax your irons to have them nice and clean, then probably you’ll be ironing one of the white shirts, or a collar, and a piece of black would come off of the iron onto the article you were ironing, well that had to be discarded and rewashed and restarched again. Those sort of things were very hard in those days. Men’s shirts had the stiff white fronts and then, when they were ironed, they had the little brass buttons. You used to put them up the front of the shirts and they looked like golden studs, they looked very, very nice in those days, but thank God that has all gone out now, and when you wash you haven’t really got to iron the men’s shirts, and their pants today have always got a permanent crease in them so that you haven’t got to press and iron them, it’s a great help to the housewife. Thank goodness the young people haven’t got to go through what we went through in the olden days, with the long skirts and all those petticoats and one thing another. It was OK in those days, but now everything’s changed of course, and the younger people have a much easier time with their washing and their ironing.

The LAGOON
I forgot quiet a lot things that happened when I was a child going to school, after we had been in Brocklehurst for a fair while, Mr Stevenson built a big house. He had a big family and he built a big house on the block next to us and moved his family in there to live, well that made Arrows, Farley’s, Stevenson and Salter’s, that’s all the people that were living in Brocklehurst at that time and people by the name of Burgess. They had a little Store and the Post Office. Well that made five homes in Brocklehurst. Well that was very good.

Anyhow, in this great big lagoon we kiddies used to paddle on weekends, paddle in that lagoon because there was black swans on it and we used to try and chase them from one end of the lagoon to the other, but by the time we got down to the other end of the lagoon they were back up this end. Of course it was great fun for us, as we saw it, because we used to roll our clothes up, pull our clothes up over our waist, paddle along and take our boots off. It’s a wonder we didn’t get bad feet or sore feet or something; but we did not, and of course it went on week after week, carrying water and chasing swans. Well then of a moonlight night our parents used to let us go out and play in the moonlight. Anyhow, that was OK too. And the Burgess family, they thought they were a little bit beyond the Salter’s or the other families, they called their parents Mama and Papa, which was very nice, and their Mama would not call them when it was time to come in, she would ring a bell. Once the kiddies heard the bell, of course, they knew it was time they had to go in, our family, of course, used to call out. Anyhow, the Burgess’s used to go home once they heard the bell ringing and they had the Post Office and a little store.

And when you wanted a loaf of bread you’d go down to the store, mother would give you threepence to get a loaf and bring back a tuppence halfpenny change. Well that was the price of a loaf of bread in those days. Well then they had the mail and you’d go and collect your mail from the Burgess’s and they were very up-to-date. They had a sulky with a hood on it. And of course that’s why i think they thought they were better than us.

SCHOOL MASTER
Anyhow, we went to school and our school masters name was Mr Smith and the teacher that taught in the small school, she was Miss Smith, but they were no relation. And I can remember we kiddies used to love to go and wash up for Mrs Smith. At that time of course she was pregnant and we didn’t know anything about this, but as time went on of course, you know what kiddies are when they all get together, they talk and talk and talk and we discovered then that Mrs Smith was going to have a baby, which was a great thing, we thought. Anyhow, after the baby was born we used to go in and wash up for her and do lots of little things that we could to help her.- Margaret Lesslie, nee Salter, 1983

Brocklehurst Public School 1908 -1912
Class Photos may be the key to identifying faces in the 1908 photograph, as it is only four  years apart and children were required to attend school between the ages of 6 to 14 years old. Children appearing in the 1908 photo would have been born around 1894 to 1902.

The Public Instruction Act 1880 required the attendance of children between the ages of 6 and 14 years for a period of no less than 70 days every half-year. Exemptions could be granted if the child lived more than two miles from the nearest school, was under regular instruction, incapacitated through sickness or other unavoidable causes, or was already educated to the required standard. 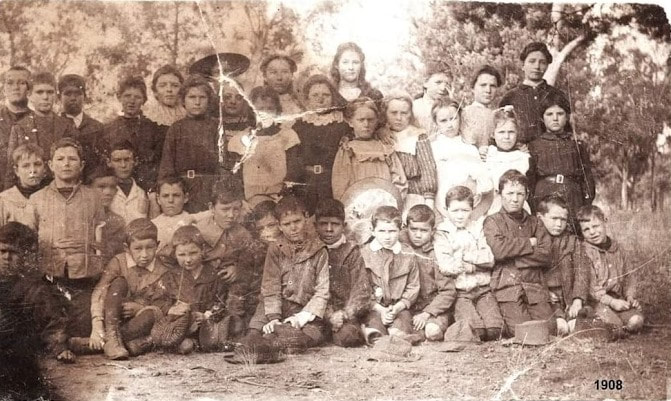 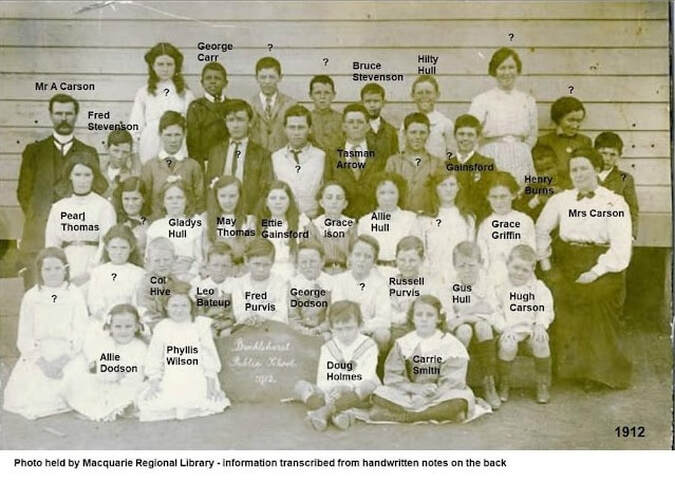 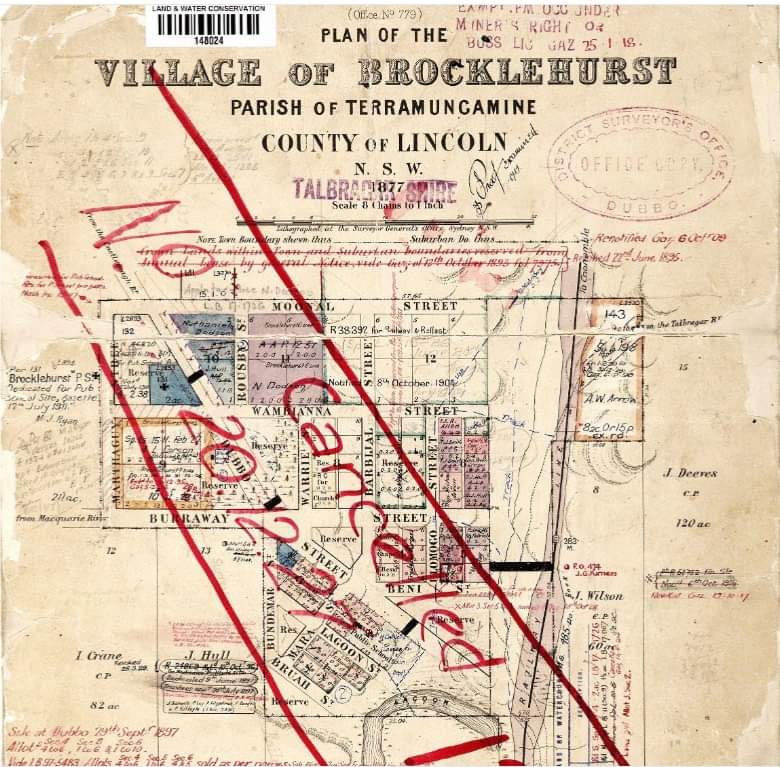 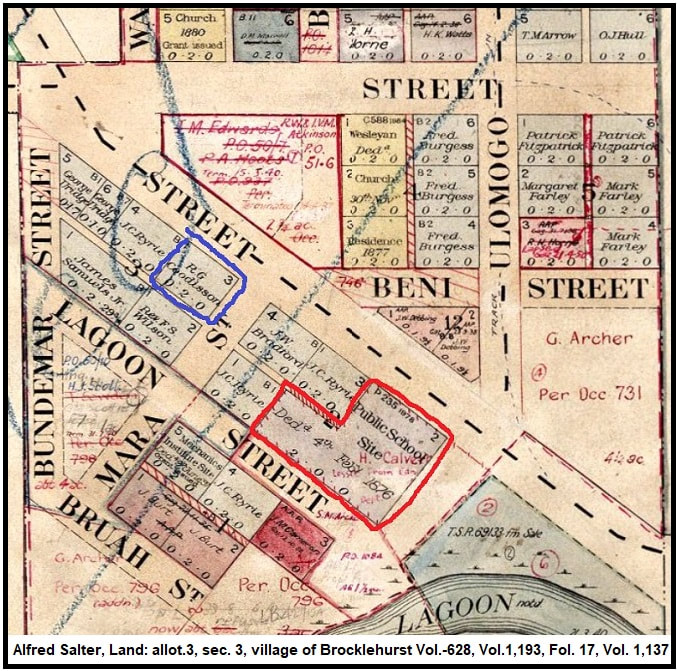 Brocklehurst showing public school and land owned by Wallace Alfred Salter in 1896
Salter's New Block
A few days since I noticed a heap of sawn timber on one of the allotments. I was anxious to know if it was for the Institute, but after making enquiries I was told it belonged to Mr. W Salter, and that he had purchased a block of land here, and was about to build a cottage where he intends residing very shortly.
Daily Liberal 31 October 1896